Beginning with the earliest taper equations by Hójer (1903) increasingly complex methodologies have been have been developed stimulated by improvements in computational capacity. Kozak (2004) reported on a history of taper function research at the University of British Columbia that dates back to 1956. The intensity and longevity of research into taper functions has led to an extensive array of different approaches and a considerable body of literature.

In New Zealand a compatible polynomial approach (Goulding and Murray 1976, Gordon 1983) is most commonly used. The compatible polynomial approach, along with many other taper functions, fails to account for differences in stem form between trees and so lacks the flexibility to describe changes in stem form resulting from site specific or silvicultural factors (Bi and Long 2001). A large degree of local bias over some portions of the stem may also exist despite a low global bias (Bi 2000); this has implications for log bucking algorithms which rely on accurate stem diameters. To negate these weaknesses a series of polynomial equations can be developed to reflect a wide range of geographical and stand conditions or a more flexible approach is required.

Kozac (1988) introduced an approach which uses a single continuous function as the base with an exponent that changes along the stem to describe the changing stem form.

Following on from this work Bi (2000) developed a variable-form taper model;

where the base function is constructed from a trigonometric volume-ratio equation following the geometry of a tree stem and the exponent includes variables that depict changes along the stem and differences in stem form associated with changes in tree size.

This function was found to be stable, flexible in its suitability for species and trees where stem form is variable, and an accurate predictor of stem taper. This model was fitted to 25 species of Australian native trees (Bi 2000) and later to Pinus radiata in New South Wales (Bi and Long 2001) where it was found to have greater prediction accuracy than nine individual site-specific taper functions currently in use. This superior performance is a result of the flexibility of functions of this type in depicting change not only along the stem but between trees of different sizes which is beyond the capacity of polynomial taper equations.

This approach was later extended to South Australia where the model was fitted to a large South Australian data set (See here for more details) further underlining its flexibility. With an adequate dataset this model could be fitted to New Zealand conditions to provide a solution with greater prediction accuracy capable of predicting stem form across the range of growing conditions and management types. This may be particularly relevant in the light of potentially changing management objectives and harvesting systems in the light of forest expansion, carbon forestry, and increased mechanisation. 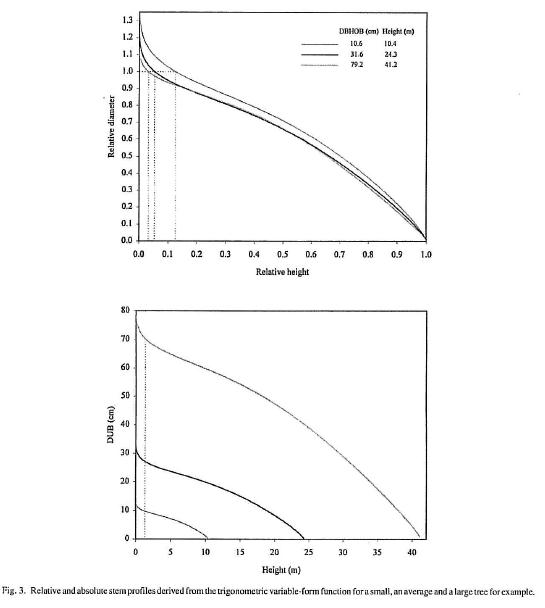 The trigonometric variable-form taper function is publicly available and has been implemented in YTGEN with species specific coefficients available for Pinus radiata and several other species. If you have the latest release of YTGEN installed you will find these installed in sample methods file in this location:

Interpine have used the function commercially in Australia and trialled its use for research purposes in New Zealand with promising results.

For more information on taper functions or any other aspect forest resource assessment please contact us. 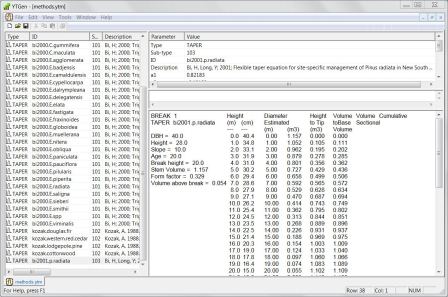