Splitting Patches Due to a Partial Stand Event

Sometimes forest events occur over part of a stand instead of the entire stand.  Some examples would be:

In these situations you have a couple options depending on the event type and end result.   In most cases its is just a matter of splitting the stands underlying patch layer into a couple of patches to describe the event on the basis of work partially completed, therefore reflecting the area treated.   This is what I will describe here and is often what is done for the examples 1 through 4 above.   Some events such as aerial or roadside spraying (example 5) would be better described using a “GIS Managed Event” which I will cover in a later post (where it would be cumbersome to split the stand into a large number of patches over time).

EXAMPLE OF SPLITTING PATCH FOR A PARTIAL THINNING EVENT.

In the quick example below a thinning event was entered into GeoMaster covering one stand however during the course of the event not all the stand (in this case one patch) ended up being thinned; with the remaining area to be completed the following year and be entered as a separate event.

Figure One: Completed Polygon in the ‘Work In Progress’ of Area thinned – Excluded area is the Un-thinned Area

Save you edits and select just the ‘Work In Progress’ polygon then under the GeoMaster tool bar select Event/Split Treated (figure four). This will identify any ‘in-progress’ events in GeoMaster for the stand under the polygon. If one is found then you are asked to confirm that is the right event, if several are found a picklist of events is presented for you to choose from. 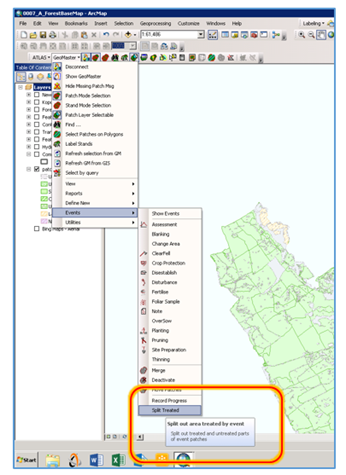 A Patch Subdivide form will appear and GeoMaster will display how many patches will be split based on the selected polygon (in this case one). You can see in this example the sub-divide creates two new patches, one 22.34 hectares and one 3.06 hectares from the original patch which was 25.40 hectares. The patch with the greyed out tick is the patch the event will be associated with. You can add a note as to why the patch is being subdivided. The date is set to the beginning of the event. Click the red tick. 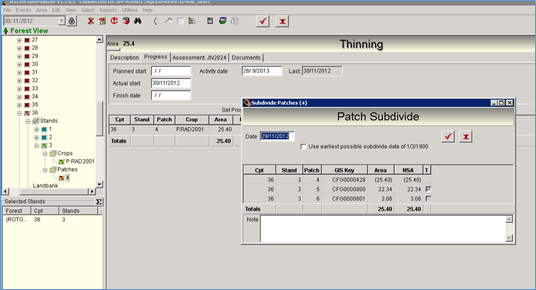 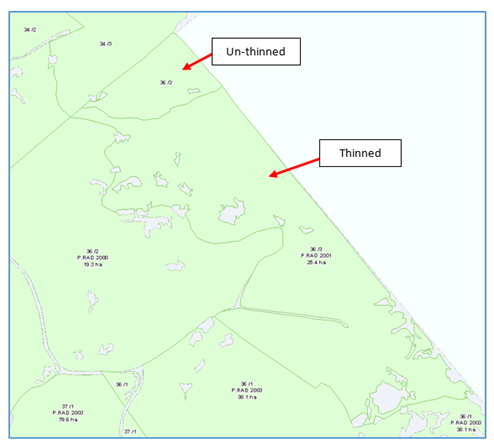 Figure Four: Stand now made up of two Patches

So now the stand has been split into two patches. A separate thinning event can be added into GeoMaster to thin the currently un-thinned patch as needed.

If you want more information about GeoMaster Harvest Manager provided by the cloud services at Interpine feel free to contact us.