Not all about the day job.. Our #UAV pilots volunteer to track Kiwi. 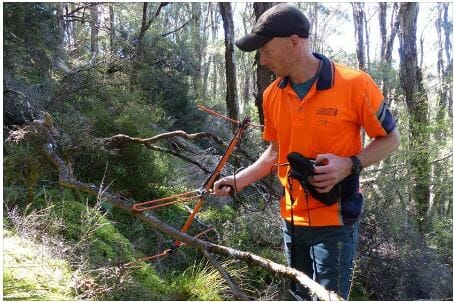 ​Quietly amongst the Kaweka Ranges in Hawkes Bay the Kiwi can more often be heard. North Island Brown Kiwi to be exact with help from the Pan Pac Forest Products Ltd Kiwi Creche, located at the Boundary Stream Mainland Island Reserve, and the tireless efforts of a few hardy volunteers like Interpine’s #UAV / #Drone pilot; Simon Bainbridge. It’s currently nesting season for the Kiwi and this time of year is busy for volunteers as day trips into the Kawekas are needed regularly… and this can often be any day of the week, to receive and analyse data given out by the small transmitters that are attached to the almost 50 Kiwi adult male birds monitored in the Forest Park. Each birds’ data in transmitted on a separate channel and once assessed a plan is made to raid the nests of these adult males in an attempt to capture the chick. The tiny transmitter gives out an array of data generated from an accelerometer, giving an indication of movement or feeding habits during the night. From the pulses sent via VHF it is possible to calculate when a male has begun nesting, and when that egg is due to hatch. Yes boys, in the Kiwi realm its the blokes who raise the young, whilst the girls go out and party. Ten days after a hatch is the ideal time to successfully catch a chick before it leaves the nest or becomes predated by mustelids. Finding a nest can be a time consuming exercise which is performed by way of direction finding the VHF signal given from the transmitter attached to the nesting males’ leg. It can be a 2-3 hour hike into the hills before receiving any signal, and then a further 2-3 hours tracking the origin of that signal using a simple radio receiver and “Yargi” antenna, but Simon appreciates how Interpine’s #drones could help in this task in the future. If a chick is caught, they suffer the same fate as their father. They are taken to the Pan Pac Kiwi Creche where they are fitted with a transmitter and let free to roam and grow within the safety of the pest proof fence. Here they are monitored for health and weight gain until they reach 1 kilogram heavy. They are deemed big enough to fend off any attack by musetlids at a kilo and are released back into the Kawekas to continue the cycle. From here the birds have been known to live for 30 years and females can grow to around 7kg where their beaks remain sensitive, their claws sharp and legs are strong. Funding and support is provided by Department of Conservation, Pan Pac Forest Products Ltd and ECOED to help save the Kiwi in the Kaweka Kiwi Recovery Programme and fuelled by volunteers whom some of hug trees during the week, and Kiwi during the weekend.