Interpine is working with the Ministry for the Environment (MfE) on a planted forest inventory system for carbon monitoring. The first planted forest measurements were completed in 2007 and 2008 (post-1989 forests) with further surveys in 2010 (pre-1990 forests) with additional data being collected on forest health on behalf of the Forest Owners Association. In 2011 and 2012 all the post- 89 plots established in 2007 and 2008 were re-measured and some additional newly identified plots established. In 2015 the pre-1990 plots established in 2010 will be re-measured along with 25 newly identified sites.

So what is LUCAS ?

The New Zealand Land Use and Carbon Analysis System (known as the LUCAS project) is a programme of work to measure and monitor the national level carbon stocks of New Zealand’s forests and soils. Carbon stock information is required for New Zealand’s reporting requirements under the Kyoto Protocol and the United Nations Framework Convention on Climate Change. LUCAS is an important part of the Government’s climate change policy package and will help inform our future international climate change negotiations. The data collected will also be used by MFE in the Net Position Report.

Why is LUCAS interested in trees on my land?

The NZ Planted Forest Carbon Monitoring System uses a national grid-based network of permanent plots to provide an unbiased estimate of carbon stored in planted forests. Sample points are located on a 4km grid across the country. A sample point (also referred to as a site) is deemed to be part of the permanent plot network if any part of the plot falls within an area of planted forest (shown in A – 4km grid in yellow with survey sites falling in planted forest selected in red). Around 212 of these sites have been selected across the country for measurement during 2015. The LUCAS project has already completed a similar inventory of natural forests using an 8km grid and the re-measurement of these plots is currently underway. 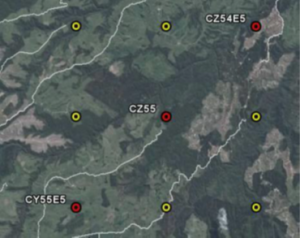