Kajavala Forestry Ltd (KFL) have been trialing a prototype portable tree optimization and processing system called a ‘Logmaister’ in their logyard in Kawerau. “We’re amazed at how this prototype is performing,” said Managing Director of KFL, Jacob Kajavala. The ‘Logmaister’ has a log bed and scanner, which can handle stems up to 38m in length. The scanner sits on a separate rail beside the log bed and moves parallel to the log. It measures the diameter, length and curvature of the stem using laser scanners. These measurements are then used to optimize the log. That information is transferred to a processor and the stem is removed from the log bed using hydraulic kickers. Logs are processed by a unit that is mounted on an excavator at the end of a boom stick. This unit is similar to a harvesting head. It grasps the stem and finds the butt end using electronic beams and rolls the stem through its jaws using front and rear-mounted saws to cut lengths. The excavator can also stack and load logs. Software for the system is supported by an Internet based database. 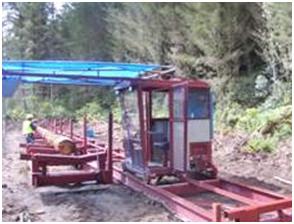 The Interpine / Logjiztix -designed system has been running for six weeks and has been performing well said Kajavala. “It’s brand new innovation…it’s the next step in optimisation because it replaces human input.” Kajavala added that encouraging progress has been made during the trial in terms of issues that he had with the prototype. “The ‘Logmaister’ is a generic machine aimed at skid sites and conventional logging but we’re looking at it for a central processing unit. So we need it to treble its production. It’s more than doubled its production since the beginning of the 6 week trial. Its still got some way to go but easy gains are being made to the next version that are enough to strongly suggest we’ll pull it off. We’re putting our money where our mouth is because we’re getting the thing built.” 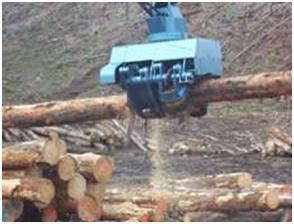 Kajavala was also concerned about what he calls “length issues.” “The quality has improved a whole lot but still needs to be worked on.” He added that the concept, however, has been a “complete success” from his point of view. “The results have been better than he hoped for. A lot of people have been very skeptical but it’s silenced a whole lot of critics…It’s a cheaper and more accurate version of the KPP (Kaingaroa Processing Plant).”