Industrial Engineering, The Use of Data and Harvesting Performance Improvement

In 2009, a staff member in a large forest management company in the North Island, New Zealand expressed concern over the reduction in piece size of the stems they were processing in to logs. This company used a log merchandising system that captured the piece size of all stems processed and all logs manufactured. As part of their operational management they processed stems as two length types, shorts (<10 metres) and longs (10 -18 metres). Shorts could be thought of as heads that have merchantable logs within them. While the reduced piece size information was compelling (Figure 1), the management company was also certain that there was not a forest based reason for the reduction – the forests being harvested across the years were similar in age and silviculture. It was hypothesised that breakage during the felling and extraction process was one likely cause of the reduction in average piece size and length. 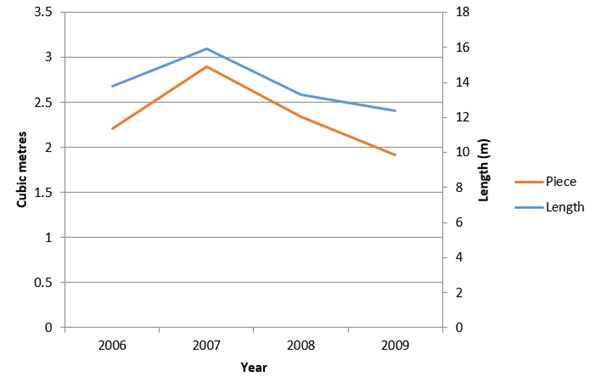 Figure 1: Changing stem length and volume over time. Based on real time measurements of 770,000 stems.

Accordingly a small felling and extraction stem breakage study was carried out on a hauler logging operation that was arbitrarily chosen.

In the mid-1980s, large corporate forest owners, and the NZ Forest Service employed “industrial engineers”. Their role, broadly, was to observe production operations and break each production cycle into task components and time each component repeatedly. Of course these time studies were not done in isolation – they were a part of a broader investigation into performance improvement. Industrial engineering and time studies were seen as integral to the premise that “you cannot improve anything that you do not measure”. It was this approach that was taken to the small study conducted on stem breakage within the hauler operation.

The study involved monitoring 20 stems from the felling face to the stem piles on the landing. Each stem was numbered with paint and after felling each stem, and any broken merchantable pieces, were measured (for length). Broken pieces were also numbered. Stem length was re-measured once they reached the landing (some never got there).

The results from the study were enlightening:

And the impacts are obvious:

A simple calculation was carried out based on these results and using the cost data known about the crew. If breakage in this study had been reduced by 50 % and all merchantable pieces had been extracted, productivity would have increased by 25%. The economic cost of the other impacts of stem breakage were not estimated.

A recommendation from this study was that it be expanded over more crews for longer so that the results of this study could be corroborated (or not). It was also believed by the operationally experienced researchers that with directed operator training that breakage during felling and extraction could be significantly reduced. It was estimated that a dedicated trainer working across three crews could, through reduced breakage and increased productivity, pay for themselves may times over. And, perhaps the most graphic result from this study was that monitoring the production cycle and collecting and analysing production data identifies opportunities for significant financial gain.

There is an almost universal question that can be applied to the results of this small test:

“What would you do, if it were your forest”?

Having bought standing forest as stumpage before I am qualified to answer that question exactly:

“Capture operational data in real time, study it intently in real time and act swiftly if the forest is not netting the income that was projected on the day that it was purchased”

If you would like more information on harvest value recovery, or like to see how you could capture real time data from your harvest operation contact our team, and review some of our cloud services such as STICKS Harvester and Woodflow Information System by ForestPHD .